MAUD LEWIS – THE HEART ON THE DOOR

Home / Books / MAUD LEWIS – THE HEART ON THE DOOR

Spencer Books of Halifax have published Lance Woolaver’s monumental 500 page biography of Maud and Everett Lewis.  It is the first major and complete biography of the Nova Scotian folk artist.  MAUD LEWIS – THE HEART ON THE DOOR will be launched as part of the annual art festival NOCTURNE, at 6:00 P.M. Friday, October 14, 2016. 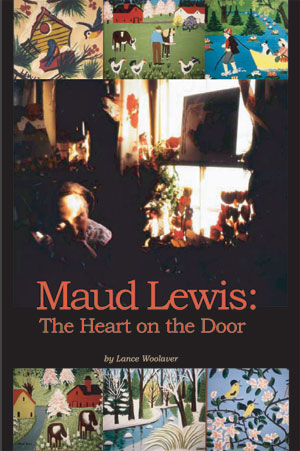 Maud Lewis THE HEART ON THE DOOR is the first full-length biography of Maud Lewis (1901-1970), the famous Nova Scotia folk artist. It includes detailed accounts of her disabilities, including a childhood battle with the juvenile rheumatoid arthritis which twisted her hands and joints. Despite this deepening and painful affliction she completed and sold thousands of bright pictures and Christmas cards from her little one-room house in Marshalltown, Digby County, Nova Scotia, Canada. Throughout her marriage to the illiterate Poor Farm watchman, Everett Lewis, she suffered from poverty and loneliness, yet triumphed over all with her brilliant, colourful and happy paintings. Her husband would be murdered for his lockbox of savings (taken from the sales of Maud’s pictures) on New Year’s Day of 1979. This book also gives a detailed account of the life of Everett Lewis and his incarceration as a child in the Digby County Poor Farm. The Heart on the Door concludes that Maud Lewis, born Maud Catherine Dowley in Yarmouth, Nova Scotia in 1901, gave birth to a daughter, Catherine Dowley, in 1928, and traces the life of Maud’s daughter, later Mrs. Paul (Catherine) Muise, until her passing. Catherine’s unsuccessful attempts to contact and be accepted by her mother, Maud Lewis, are documented. Catherine’s father, Emery Allen, the love of Maud’s life, abandoned Maud to the scandal of small-town life and to her increasing disabilities and loneliness. Excerpts: “This is a story written in heartbreak. It is the story of a child’s wish to be accepted as a human being. It is a story of murder, poverty and treasure. It is the story of the worth of art in the struggle against pain. This is a story of broken families, of lonely lives, of a lost love and abandonment. It is a story of murder and a lockbox treasure. It is the story of a man who made a woman pay for his own frailties. All must be taken together. They belong to each other.” “Many of the famous of our time – the actor Peter Falk, Premier Robert L. Stanfield, the actor Judy Dench – would come to admire Maud’s pictures. Her pictures cheered them up. As with many, however, who came to visit with Maud in her crooked little house, these famous would never know the strange secrets of this difficult life.

”William Gass said that “The true alchemists do not change lead into gold; they change the world into words.” I am not generally a fan of non-fiction but the artistry with which Lance Woolaver chronicles the life, art, and dignity of Maud Lewis has won me over to this genre. Mr. Woolaver’s chronicle of Maud Lewis’ extraordinary life within his highly informative and fine historical analysis of the political, social, and economic life of Nova Scotia at the time, is a must read for anyone interested in Nova Scotian history. But it is also a must-read for anyone who seeks to be inspired by the tremendous courage of this little lady who, out of very straightened personal and social circumstances, was able to produce works of art brimming with love and happiness. Mr. Woolaver was able to change her world into words, wonderful words, and I am very grateful to him for that.”

Review by Carmen Vinci on Amazon.com and Amazon.ca

“The complete story of Maud Lewis. This is obviously a life’s work, Lance Woolaver goes into great detail telling us this incredible life story. He tells us everything you wanted to know about one of Canada’s most celebrated folk artists.  Bravo!”

Review by Audrey Moore on Amazon.com and Amazon.ca

Review of Maud Lewis: The Heart on the Door by Elissa Barnard, Local Xpress

May 23, 2017 Maud Lewis: The Heart on the Door is new biography that’s ‘dark at every turn’ Lance Woolaver’s new 500-page book is an in-depth look at the painful and impoverished life of Nova Scotia’s most famous folk artist. 343 Apr 2, 2017 2:16 PM by: Elissa Barnard Maud Lewis depicted a colourful rural life in paintings that she […]

BOOKSIGNING AT ZWICKER’S GALLERY ON SATURDAY APRIL 15 at 2:00 P.M.

April 12, 2017   Lance Woolaver, playwright and author will be at Zwicker’s Gallery, Halifax this Saturday with a few last copies of the new Maud Lewis biography The Heart on the Door.  Lance will also be on hand to sign copies of his hit play Maud Lewis: World Without Shadows, as produced by the CBC, Neptune Theatre, […]

April 6, 2017 Watch for an upcoming Global TV segment on the recent interest in Maud Lewis and Nova Scotia folk art.  Interviews were conducted on April 5 and 6 by Ross Lord, Atlantic Correspondent to News at Six.

Portia to Be Produced in Ontario

March 21, 2017 Portia, Lance Woolaver’s hit musical about the great Nova Scotian contralto, Portia White, is being produced in August at the Victoria Playhouse in Pretrolia, Ontario.  David Hogan, the Stratford director, will direct.  The play opens on August 15, 2017.  This is the third production of the play.